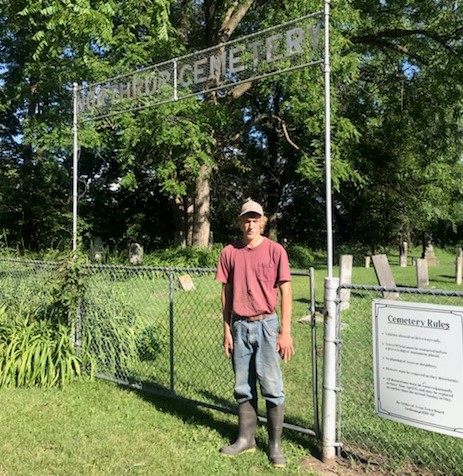 For his Senior Project, Brodhead High School Class of 2022 graduate Dakota Schwartzlow wanted to make a difference in his community. Dakota, who resides in the Town of Avon, made the decision to clean up a local cemetery that was in need of some care.

The cemetery is the Northrup Cemetery, which is located on W Avon North Townline Rd in the Town of Avon. The Northrup Cemetery mostly contains burials from the 1800’s and the most recent burial is believed to have been in 1946. Burial records for the cemetery do not exit as they were destroyed in a fire, said Duane Niedermeier, who served on the Avon Town Board for 49 years. During Duane’s tenure on the board, which ended in 2020, there was not a single burial at the cemetery.

The cemetery has been tended to with the lawn being mowed regularly, however the tree and brush growth had been left unmaintained. Dakota’s project included trimming trees and cutting back the overgrowth, which greatly improved the appearance of the cemetery. During his efforts, Dakota even discovered several graves that had been hidden over the years in the overgrowth.

On behalf of the Avon Town Board, I would like to thank Dakota for his hard work and congratulate him on a successful Senior Project.